Assessing Groups In The Airport 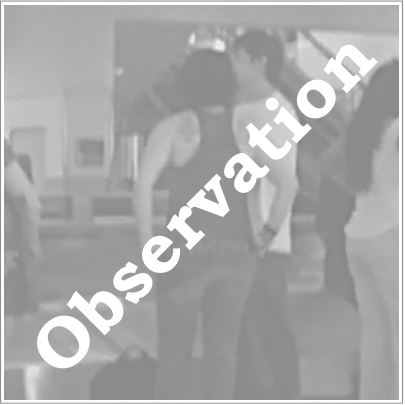 you will be practicing and developing your ability to assess groups of people in an airport setting.

1. Context: This video is shot at the baggage claim area of Newark Airport in NJ. Those of you who have gone through the Tactical Analysis Program likely recognize this video from the lesson on pacifying behaviors (man on the right side of the frame) as well as the lesson on how to assess areas with negative atmospherics.

2. Once you have watched it once, ask yourself the following three questions:

1. What is the relationship between the man wearing the white tee shirt and the woman wearing a green and black striped tank top?

2. What are the behaviors you observed to assess that relationship (group dynamics) and the individual behaviors that support that assessment?

3. Does the individual behavior (the clusters) of each of the two people confirm this assessment? If no, explain why you feel that your assessment above is accurate.

Stop! Write your answers on a sheet of paper before scrolling down and being able to view our answers.

1. What is the relationship between the man wearing the white tee shirt and the woman wearing a green and black striped tank top?

Based on the distance between the two people, their relationship can be categorized as being in the "Intimate" zone.

2. What are the behaviors you observed to assess that relationship (group dynamics) and the individual behaviors that support that assessment?

When the video starts, they are less than a foot away from each other

When the guy begins to walk away and then comes back, he is very close behind the woman (behind her back).

3. Does the individual behavior (the clusters) of each of the two people confirm this assessment? If no, explain why you feel that your assessment above is accurate.

No it does not.  Here is my rationale.

Cluster Displayed: Both people are displaying signs to assess them as being in the uncomfortable cluster as they are closed off (arms crossed), both are swaying back and forth, the woman was swinging her arms at the beginning of the video, and they both have elevated levels of situational awareness.

What should/should not be displayed: After judging the space between them as being in the intimate zone, I would typically expect that both people would be displaying the comfortable cluster if that was an accurate assessment.  When I observe dominance, discomfort or submissiveness displayed by either person in the group, I question if the space between them reflects the true relationship that they have.  For example, getting too close to a person and breaching (in this case) their intimate zone is seen as a dominant display if you don’t actually have an intimate relationship. If the other person responds with dominance, discomfort or submissiveness to that breach, it often tells me that the cause for the behavior is worth investigating.

Why I feel their relationship is actually the “intimate zone”: While I would typically consider the space and close proximity between them as the source of their discomfort when assessing groups (meaning that their relationship isn’t intimate, but something less than that), in this setting I believe the source of their discomfort is likely due to the fact that the area has negative atmospherics. I believe that it isn’t due to their close proximity to each other because when the man gets very close to the woman and stands behind her back, she doesn’t do anything to reveal a heightened flight response/uncomfortable cluster such as leaning away, moving away or even paying a great deal of attention to him, BECAUSE OF THE FACT he is behind her back. Because of this, I assess them as likely having an intimate relationship despite their display of uncomfortable behavior.

The first goal of the exercise was to assess relationships between people in the group, so for any behaviors that you missed, go back and rewatch the video to observe each display identified.

Repeat the exercise and video as many times as is needed to make these various assessments fluid and natural.

A second goal of the exercise was to identify how the environment provides supporting, conflicting and contradictory information to you assessment. So,

Ask yourself: when presented with conflicting information when assessing a group relationship, how do you naturally prioritize what you are exposed to and, if that isn’t an effective way to observe the flight or fight response, how can you consciously begin to override the way you are doing it now to become more accurate?

Go to a bar, coffee shop or a spot in the office where you can observe at least two people interacting with each other and go through the same process: consider what the initial assumption about the relationship is, what information supports that assessment and what information could counter your assessment before landing a final decision.

1. Article: Everywhere You Go There Are Groups